The rhetorical soverignty of play 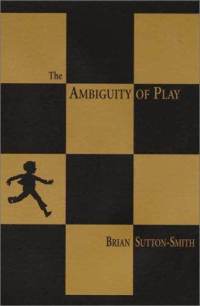 The checkerboard-patterned cover of Brian Sutton-Smith’s The Ambiguity of Play (1997), unambiguous in its neat separation of light from dark, belies a complex rhetorical analysis of play theory.  Before unpacking “play,” Sutton-Smith clarifies the very meaning of “ambiguity,” invoking William Empson’s Seven Types of Ambiguity (1955).  Play could be ambiguous in terms of (Sutton-Smith, p. 2):

Within an array of play forms and experiences, object play has a place in each sphere Sutton-Smith outlines (mind or subjective play, solitary play, playful behaviors, informal social play, vicarious audience play, performance play, celebrations and festivals, contests/games/sports, risky or deep play).  The rich diversity of play possibility, posits Sutton-Smith, is a main factor in its persistence over time, much like the evolutionary biology of species survival.  This diversity is temporal (e.g. duration, frequency, spontaneity) as well as spatial (e.g. domestic, public, international).

I went into the book without much prior context, and so was not expecting a rhetorical analysis of play.  Sutton-Smith proposes seven general discourses of play: themes of 1) progress, 2) fate, 3) power, 4) identity, 5) the imaginary, 6) the self, and 7) frivolity.  These rhetorical frames vary by historical traditions, function, form, players, disciplines, and groups of scholars.  One of Sutton-Smith’s most pointed criticisms is of a “progress rhetoric of play,” primarily within the discipline of developmental psychology and education, which sometimes-for-better/sometimes-for-worse places children on a deterministic forward march of ages-and-stages progress caused by play (as opposed to considering play as running a parallel path in increasing complexity, or as a dialectic).  Sutton-Smith contends, “Play development is not assured just because children are on the playground” (Sutton-Smith, p. 43).

His section on the play rhetoric of identity explores cultural hegemony and the loss of play rituals and objects.  Sutton-Smith’s engagement with issues of communal and individual identity heightened my awareness that much of my own focus, at least with this blog, has been on technological objects and their relation to children’s individual identity development.  If overgeneralized, that lens could ostensibly be construed as culturally hegemonic, detached from indigenous cultures and collective identities.

I recall an incredibly earnest and compelling demonstration at USC Annenberg during the spring by Cristóbal Martínez, a member of the SMALLab research group and an incoming Ph.D. student with Jim Gee in Rhetoric, Composition, and Linguistics at Arizona State University (see his worked example “Tecno-folklórica: A Digital Media Approach to Indigenous Pedagogy and Sovereignty”).  Martínez’ artistic work centers on the design and application of digital materials supporting indigenous cultural and rhetorical sovereignty.  For example, one of his pieces is a digital Chicano Ayayote rattle for facilitating a Mediated XicanIndio Resolana.  As Martínez describes, “At this place, oratory is expressed through the gestural manipulation of digital media coupled to cultural protocols for verbal communication. Within this environment, participants use tangible objects to interact with each other and with dynamic visual, textual, physical, and sonic media through full-body ceremonial gestures.”  A child’s identity development or embodiment/virtuality with hybrid analog/digital objects such as this merits further exploration.  I look forward to reading more about Martínez’ work with culturally situated digital technology in K-12 education, bridging the needs and honoring the roots of children and elders in formal and informal learning settings.

This entry was posted in Uncategorized. Bookmark the permalink.