The many “meaning of things” 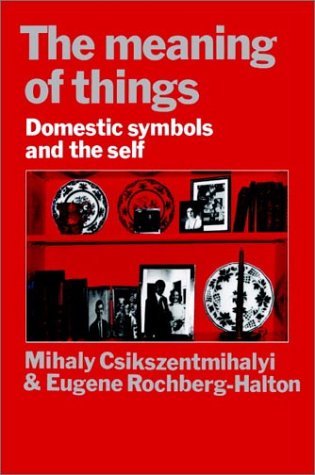 Seeing as the month of May took me many places quite far away from home, it was oddly acontextual to be reading University of Chicago sociologists Mihaly Csikszentmihalyi and Eugene Rochberg-Halton’s (C and R-H henceforth for brevity’s sake) The Meaning of Things: Domestic Symbols and the Self (1981) during my travels.  The book chronicles C and R-H’s 1977 study of 82 families in Chicago and Evanston, IL (home of my alma mater, Northwestern).  Spanning home interviews with 315 people – primarily African-American and White; lower-, middle-, and upper-class; spanning four-generations of families – C and R-H asked people about the household objects they most cherished, and explored their physical and psychological contexts.  The book presents a landmark departure at the time from research on material objects that was focused on “materialism” and marketing, and instead combines a sociology of consumption with one of transaction as well.

While living out of a duffel bag for most of last month, I was far away from the place (Los Angeles) where I currently store most of my physical possessions.  I felt a tinge of guilt calling Los Angeles “home” in conversation with my mom while sitting on my parents’ bed during a stop at my childhood home in NY.  My “home” during the month of May could just as naturally have meant the “homeland” of the Jewish people in Israel, seeing as I was there to visit my youngest sister, who was herself temporarily calling a dorm at Tel Aviv University “home.”  The Meaning of Things had me thinking as well about the pieces of home that myself and other fellow travelers carried in the spaces between homes, liminal zones including a 9-hour layover in the Madrid airport and a Memorial Day weekend spent in Boston for the annual International Communication Association (ICA) conference.

During one leg of my trip – a nearly half-day transoceanic NYC-Tel Aviv flight – I observed one family with small children maintaining a semi-home-like space among and between two airplane rows.  Engaging with one of the main threads of this summer blog – children’s identity negotiation in relation to and with technologies – I was particularly struck by this family.  One unlike my own, the kind in which all three children embody the improbably precise blending of their biological parents’ physical genetic material; these two sisters and a brother, all bright blond haired and suntanned skin, curious blue eyes, and ruddy wide cheeked smiles.

At one point during the flight, having exhausted my library of musical iPod/iPhone options and taking a break from The Meaning of Things, I couldn’t help but study the older sister and brother, probably 7- and 5-years-old respectively.  With the encouragement of their father sitting between them, they each used a digital camera, one given to each child, to take pictures of their baby sister, who was learning over the seat in front while perched on their mothers’ shoulder.  The boy, adept at the digital camera and naturalized to his power over it as well as its inherent power, took one photo and immediately turned it around to view the screen.  He wanted to see the photo representation of the sister sitting in front of him.  He was quite happy to see that he had taken a photo of the baby mid-laugh, and turned the camera around once again, this time to show the baby the photo of herself.  Being a baby, she giggled and smiled, playfully grabbing at the camera.  It seemed to me that the boy took the baby’s playful glee for affirmation of his photo of her causing her happy feelings.  The baby may have just been happy because she was mirroring her siblings’ smiles, or enjoying the attention being paid to her, and was probably not able to see or understand the small rendering of herself on the tiny camera screen.  It is a bit of a conjecture, but it seems the identity captured in the photo had more of an emotional impact of the photographer than the subject.  Reflection on the act caused the boy pride and pleasure.

The camera in the case of this family on the plane served as a domestic symbol in a non-domestic space.  I focus on this brief moment because I am interested in how families with young children create, take apart, and recreate an idea of “home” in places outside of the home using technology, tools, objects, etc.  As well, I am interested how “unequal childhoods” (Lareau, 2003) and inequalities of cultural capital impact young children’s “naturalization” (Bourdieu, 1984; Seiter, 2007) to digital objects inside and outside the “home” (which itself can be a happy or unhappy place for a child to be).  C and R-H’s study focused on how objects within the home make and use those who make and use those objects within the home.  Their goal, they write, was to “explore how the most complex patterns of emotion and thought can become embodied in and symbolized by concrete things, that is, how things themselves are part of the interpretive sign process that constitutes meaning” (p. 98). While C and R-H did not interview children under 8, their chapters on object relations and the development of the self, the transactions between persons and things, and signs of family life are highly relevant to the focus of my research.

Social psychologist George Herbert Mead theorized that any object – inanimate or animate, human or animal, or just physical gestures simulating an object – towards which a person reacts, acts, or responds can be a “role model” (1934, p. 154), as antithetical as it may be to our understanding of that term.  Having attitudes towards an object/other makes one conscious of the self as a metacognitive referent.  For the young boy to take a photo of his baby sister, the production of the object made the boy more conscious of himself: his ability to master the camera, his ability to make others feel good, and his ability to feel good by making others feel good. Through this manipulation, the young boy built his autonomous self – working through questions of “Who am I?” and “What can I do?”

Personal traits emerge and socialization often occurs through young children’s object play.  Erikson (1950) described this process as the child’s decentralizing of the self: moving from one’s own actions to one’s position in a web of relationships.  Many children use rituals in the pursuit of controlling randomness in their daily object play.  C and R-H write that young’s children gross motor actions such as throwing, moving, and breaking objects,

Provide the clearest evidence that there is an agent capable of having an effect.  The more improbably the action, the more it goes against the laws of random chance, the more it defies entropy, the clearer the message that there is a self here that does make a difference.  When a girl hopping on one foot throws a ball against a wall, claps her hands twice, and then catches the ball on the rebound, she demonstrates through this strange ritual how much she is in control of randomness (C and R-H, 1981, p. 117).

The young boy taking the photo used the camera to control and capture a random momentary baby giggle.  The camera serves as a tool for the boy’s self-development, as he learns that taking a joyful photo leads to a joyful reaction among his family members, that the sharing of joyful photos is valued.  That sharing may have occurred historically after the film was developed, compared to the immediate transactions many now come to expect from photography, be it on their digital cameras or phones.  It is not just the person or the thing that gives an object meaning, but also the process, ceremony, or culture of transaction.

C and R-H found that people’s relationships with objects have a lot to do with their relationships with people.  Borrowing from Dewey, C and R-H describe cultivating a “cosmic self” or “that portion of the self whose ultimate goal is the larger harmony of things” (p. 192).  I was particularly taken with a response from the youngest member of the entire sample, an 8-year-old boy, on what all his bedroom objects meant to him:

They make me feel like I’m part of the world.  Because when I look at them, I keep my eyes on them and I think what they mean.  Like I have a bank from the First National, and when I look at it I think what it means.  It means money for our cities and for our country, it means tax for the government.  My stuffed bunny reminds me of wild life, all the rabbits and dogs and cats.  That toy animal over there (points to plastic lion) reminds me of circuses and the way they train animals so they don’t get hurt.  That’s what I mean, all my special things make me feel like I’m part of the world (C and R-H, 1981, p. 193).

The boy’s bedroom is a site of microcosmos, an interconnected energy beyond his Chicago walls.  This relates strongly to C’s later work on flow (1990), of focusing one’s psychic energy into objects and activities in a way that allows the object to return that energy to the person in the form of enjoyment.  Going back to that other boy on the plane, what might C and R-H say about him?  They write,

The drawings and photos of one’s children that so many adults cherish are signs of the self’s extension into the future; they prefigure the development of one’s descendents who will carry on the psychic order one has created to generations to come […] When used in this way, household objects serve a symbolic purpose; the materialism involved in the transaction is instrumental (C and R-H, 1981, p. 242).

One shortcoming of C and R-H’s study is that, limited a bit within their sociological frame, much of their discussion does not account for political economy and the infrastructures of power that disenfranchise certain populations from making choices in their daily transactions with objects.  Sometimes being able to selectively take piece of your assuredly static home with you is a luxury.  Sometimes, home is inherently transitory, and the constant movement of a small amount equaling the sum total of one’s possessions, particular for small children in unstable economic circumstances, is a certain kind of torture.

I appreciate The Meaning of Things as another way to understand the nature of relationships between young children and digital and non-digital technological objects in traditional and non-traditional “domestic” spaces; locations like the row of an airplane or a seat on the subway turned domestic in the presence of family members.

Csikszentmihalyi, M. and Rochberg-Halton, E. (1981). The meaning of things: Domestic symbols and the self. Cambridge: Cambridge University Press.

Mead, G. H. (1934). Mind, self, and society from the standpoint of a social behaviorist. Chicago: University of Chicago Press.

2 responses to “The many “meaning of things””