Bot I Never Thought It Would Happen To Me

Chances are, this is not my first encounter with a bot.  Bots now supposedly make up 61% of all web traffic.  From 2012 to 2013, there was an 8% increase in bots that can be described as “Other Impersonators,” which includes software that masks itself to appear legitimate when conducting security breaches.  Twitter is a notorious breeding ground for bots, which are the social media equivalent of collagen injections, plumping up the follower counts of clients who pay for the appearance of popularity.  There are also purposefully amusing Twitter bot accounts, like @tofu_product, which is sort of like having an automated conversation with yourself (or, at least, the self you present through your Tweets.)

But as someone who studies the social and cultural dimensions of communication technologies, I was a little taken aback today when I found @merylalper9, a Twitter account impersonating my own @merylalper, especially since I only discovered Bot Meryl eight months after her first tweet: “Anyone in Davis know how to play the piano and willing to give me lessons?”

I found her, naturally, by Googling myself—or rather, a Google Image search of myself (In 2014, we can all admit that we Google ourselves, right?)  When I searched, an unfamiliar image (below) caught my eye.  According to this Google Image search, it had been “Retweeted by Meryl Alper,” when I had done no such thing.

The giveaway: Definitely not “Retweeted by Meryl Alper”

I’m more amused than upset over being impersonated by a Twitter bot.  Sure, @merylalper9 lifted my picture and bio right from my public Twitter profile, including a link to my professional-facing website (see both below).  But I suppose I’d be more offended if Bot Meryl had replaced my website in their Twitter bio with something spammier or NSFW. 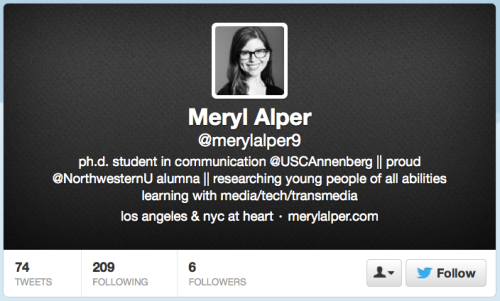 There are subtle and not so subtle differences between @merylalper and @merylalper9, both cosmetic and substantive.  Bot Meryl didn’t lift my high-res profile photo directly, but rather is using a low-res thumbnail of that photo.  Some of Bot Meryl’s funnier insights (and how far they deviate from Not-Bot Meryl) include:

Suggestions for what to do with Bot Meryl poured into Facebook and Instagram after I (privately) posted about my discovery of her.  One friend advised me to retweet Bot Meryl, and see if she responded.  HASTAC’s Fiona Barnett suggested that I should make @merylalper99 and start impersonating @merylalper9.  I guess if you can’t bot ‘em, join ‘em, right?

While I live in Los Angeles, home of the celebrity and the celebrity impersonator, I don’t a have verified Twitter account with an emblematic blue checkmark next to my name.  For the rest of us non-celebs, I discovered that Twitter does have a mechanism for reporting impersonation accounts.

I am a bit concerned that Bot Meryl fools the untrained eye.  For example, I noticed that of Bot Meryl’s 6 followers, at least one of them is my former student (or rather, the alias Twitter account one of my students created for an in-class project last semester).

Clearly, not everyone on Twitter is who or what they seem to be, or for that matter, is even a person.  Twitter is a platform that encompasses many kinds of relationships between living and non-living things (a la Bruno Latour’s Actor Network Theory)—even those between horses and e-books (and Latour and his published writings).

I’m still left wondering what would make my Twitter profile attractive to the algorithms used by Bot Meryl’s creators?  What subjective judgments were made about me through my data and written in code?

I don’t think I’ll officially follow Bot Meryl, but I’m not quite ready to report her to Twitter yet either.  After all, she’ll make a good show-and-tell piece for the discussion section students in my Communication and Technology class during our week on bots, big data, and the quantified self.